California’s Three-Strikes Law came into effect in March 1994 with the purpose of decreasing the number of violent re-offenders. The law mandates imprisonment for a minimum of 25 years for offenders found guilty of a third felony. In a sense, this law operates as, “Three strikes and you’re out.” While the first two offenses must be serious felonies, the third can accrue to be any type of felony (Greenwood, et al., 1994). To combat the law, Stanford University created the Stanford Prison Advocacy Project. They provide unique services for those affected by the Three-Strikes Law such as litigation and research.

Stanford Law School’s Justice Advocacy Project was created to combat the Three-Strikes Law through a variety of methods. However, their most impactful initiatives involve direct contact with the offenders. The project provides legal aid to represent those sentenced to life for minor crimes under the Three-Strikes Law and pursue civil rights impact cases regarding prison conditions and mandatory minimums. It also is a key component to develop criminal justice reforms to reduce sentences for non-violent crimes, such a Proposition 36 (Stanford Law School, 2018).

Furthermore, their Ride Home re-entry program provides services to released offenders to assist them in acclimating back into society. One of these services is access to re-entry counselors. These counselors are all reformed inmates. Visitation with these counselors is meant to decrease recidivism rates (Stanford Law School, 2018).

In addition to programs, they also provide cutting-edge research that gives Stanford Law School students valuable experience. This experience allows Stanford to continue their movement with the next generation of lawyers. Their research is meant to push the legal boundaries and influence policymakers to provide equal protection and rights for individuals convicted under the Three-Strikes Law (Stanford Law School, 2018).

Due to public outrage to the Three-Strike Law, Congress passed Proposition 36 (Prop 36) in November of 2012. Prop 36 changed the sentencing requirements, so third-strike offenders were only subject to imprisonment for a minimum of 25 years if they are found guilty of a third violent felony. Therefore, offenders who were serving time due to non-violent third-strikes received a reduced sentence. Furthermore, the law treated them as if they only had two strikes (The Judicial Branch of California, 2018)

Furthermore, a study conducted in 2013 found that Prop 36 resulted in the release of over 1,000 inmates. Moreover, less than 2% re-offended with new crimes, which is below state and national recidivism rates. The release of inmates led to financial advantages by saving taxpayers in California between and $10 and $13 million (Aleaziz, 2014).

Many critics of Stanford Law School’s Justice Advocacy Project believe that it obstructs investigations and frees violent offenders too soon. Rates of violent crimes in California increased by approximately 4% from 2015 to 2016 (Thompson, 2018). Moreover, property crime and violent crimes increased by 8% in 2017. Police found that habitual offenders committed most of the offenses (Harvard Kennedy School, 2018).

Furthermore, critics claim that the Stanford Law School’s Justice Advocacy Project is discriminatory in their services. They claim that it provides fewer and lower quality services to minority individuals and those suffering from mental disorders. Further claims say that they favor individuals of higher socioeconomic classes in their programs and services (Ghosn, 2015). 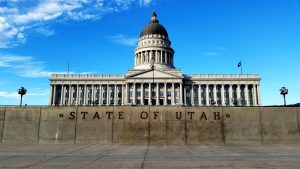 While Utah does not have a formal three-strike law, it does have provisions that exponentially increase the penalties for habitual offenders. According to Utah Code 76-3-203.5, an offender that has been found guilty and convicted of two violent felonies is subject to an enhancement in their punishment when convicted of a third violent felony (Utah State Legislator, 2013). This can lead to a first-degree level sentence for a felony that would classify as a third or second-degree under normal circumstances. Furthermore, if the first offense was a first-degree felony, then probation can be revoked. Furthermore, the individual’s standing as a habitual offender plays a key role in parole decisions (Canyon’s Law Group, 2018). Also, unlike California, Utah does not have an established advocacy program to ensure equality for these offenders.

Domestic violence offenses in Utah are treated similarly to the Three-Strikes Law. In these cases, enhancements are made to the offender’s punishment after one prior charge of domestic violence within a five-year period (Utah State Legislature, 2018).

Ghosn, A. (2015, February 25). The Pitfalls of California’s Three Strikes Law. The Stanford Daily.