How Fast is 5G: All You Need to Know

The world’s first 5G-enabled smartphones are available on the market with a promise of ultra-fast speeds, lower latency, and much more.

Despite the hype, people have many questions, like how fast is this technology compared to 4G, who has the fastest access to the technology in the world, etc.

This post answers all your questions about the speed of this next-generation network.

How fast is 5G Compared to 4G LTE?

No doubt, 5G is faster than 4G LTE. But how much faster depends on the carrier’s network you use.

With the 4G LTE network, you can achieve about 33.88 Mbps download speeds. Its speeds offer a much greater range, with the slowest being faster than average 4Gspeeds. The fastest 5G speed can be 1,000 Mbps or even above.

Also, it uses below-6GHz frequency bands, but these do not support its promises. Despite these, this next-generation technology trumps 4G LTE.

Who has the fastest 5G in the world?

The speed varies hugely across the countries. According to SpeedTest field research, the United Arab Emirates has the fastest 5G network speed of 959.39mbps.

When it comes to the fastest 5G network, AT&T Mobility has the fastest speed score, according to Ookla tests. It is followed by T-Mobile, Sprint, and Verizon Wireless.

As of now, it’s to say who will occupy the first few positions because network carriers are constantly working on improving their 5G ability.

Is 5G Faster than WIFI?

Wi-Fi depends on an unlicensed spectrum that people can use freely. But, this has a weaker signal than 5G because many people in your neighborhood use the same frequency band. This is true, especially if you live in a densely populated area. 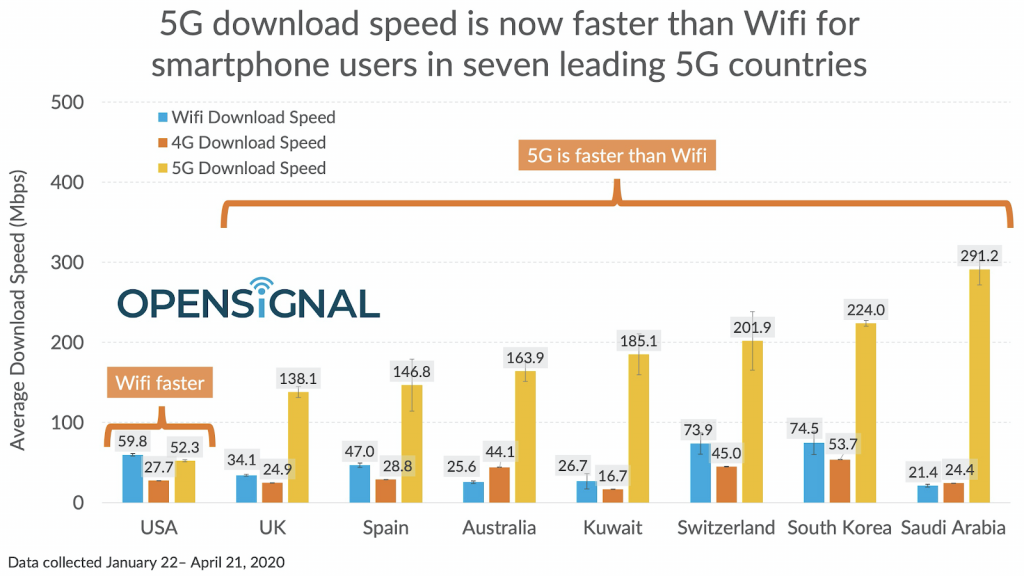 Initially, most countries offer 5G services exclusively on fast high-capacity mid-band spectrum — around 3.5Ghz. In the U.S. AT&T and T-Mobile have launched their main service on low-band spectrum, which has less capacity but is suitable for wide network coverage.

Network carriers are increasingly offering the this next-generation technology on higher frequency bands. As a result, the average speeds of the network will increase significantly.

Though this still needs a lot of improvement, 5G services will make the networking experience even easier and more valuable than ever before, especially for smartphone users.

Finally, it certainly is faster than many existing network technologies, though the speed may vary by countries and networks.